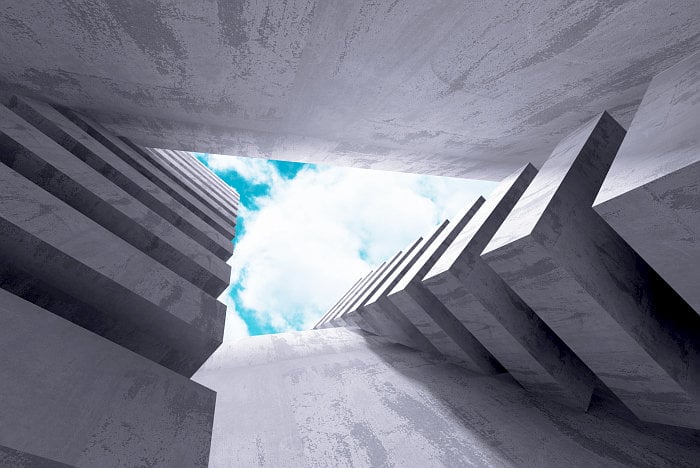 It’s no secret that some B2B companies are extremely bad at building their social media following mainly because they can’t stop thinking that social media is B2C nonsense. As social media audiences age, companies are increasingly realising that these marketing channels, previously associated with millennials, can be a valuable source for lead generation.

For the sake of this experiment were not looking at how construction companies are doing on Linkedin because it's expected that any half-decent B2B company will have a presence on the most important B2B social network. Scoring multi-million construction companies on their LinkedIn effort would be as pointless as giving cats an award for cuteness. (Although we may have a look in the future just to check...)

Here are the biggest UK construction companies sorted by total social reach. Click on the follower count to visit their social media accounts.

You may expect builders’ Facebook content streams to look fairly similar but surprisingly they’re completely different. It would be too optimistic to say that they all know what they’re doing and that they’re following a strict construction industry social media strategy. At the same time, some of them are doing a really good job. Facebook for B2B is not the easiest thing to get right.

It makes a lot of sense. Facebook CTAs are easier for B2C companies that have the button linked to their ecommerce goals. If you’ve ever managed a B2B Facebook account, you know how lousy the conversion rate is for the “Call Us” button. I wouldn’t be surprised that Balfour Beatty is getting a marvellously high CTR compared to what they’d get with a more traditional button.

Carillon is using their Facebook stream to showcase various professions and to promote apprenticeships. Morrison Utility on the other hand are taking a much more fun approach to their Facebook campaign. A standout example must be the Elf movie re-enactment. They’ve taken the slightly frustrated film up a notch by introducing Mrs Santa. 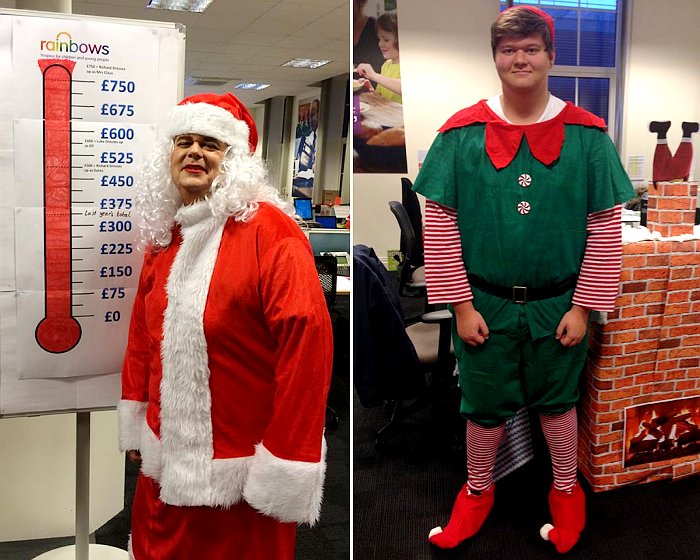 Of course, with big corporate businesses there will always be a fear about keeping the company image intact but you shouldn’t be afraid to post controversial stuff as long as it’s not insulting anybody directly.

With political correctness on the agenda and a 20-head strong legal team peering over your shoulder it is easy for the marketing team to go into passive mode. This is where all the boring social media posts are coming from. Everyone is so afraid to cause controversy that the best bits of content are trimmed off.

Mears, interestingly, are not showcasing their own work at all. Their posts are about social responsibility, charity issues and similar things unrelated to construction. It is commendable, however, it also raises a question of brand recognition.

If I weren’t familiar with this company, looking at their Facebook account wouldn’t give me any idea as to their field of expertise. It’s dangerous to assume everyone knows your company. You can perhaps afford such negligence when you’re McDonalds or Coke but in B2B social media your main priority should be clarity of your message.

Construction and architecture are very generous multi-layered topics offering a lot of concepts and connotations. Yet very few builders are approaching their construction industry social media strategy from a creative perspective. Only Kier figured out using LEGO to deliver a message. 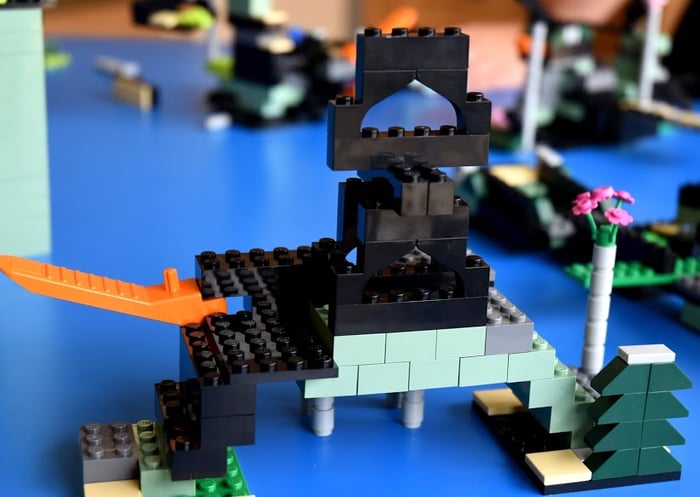 Kier have even launched a minisite to help tell ordinary people about civil engineering and building bridges. Unfortunately, they’ve gone about it the wrong way. The minisite is hosted on Blogspot – one of the un-coolest social sites ever conceived. I’d get it if they had built it in Tumblr because then they’d at least enjoy some interaction from other platform users.

The best tactic would be to have this minisite hosted on their own domain. We see this mistake cropping up quite often – a brand creates a beautiful minisite to deliver a viral marketing campaign and before you know it the campaign really goes viral; the only problem is that all the backlinks that power organic rankings are pointing to Blogspot and adding zero SEO value to the brand’s own website. It makes the SEO in me cringe thinking about the lost opportunity.

Generally we were impressed by how well the big construction companies are doing on Facebook. The main mistakes were:

We are awarding extra points to the few construction companies that are trialling the treacherous waters of Instagram. It's not the easiest job in the world to master this social media site that started out as a space for sharing personal photos and then emerged as a B2C marketing channel. If you want to delve deeper into this topic we've got a great series of posts on how to do B2B marketing on Instagram.

Looking at Balfour Beatty’s Instagram account is a real experience. I just realised something when I said it:

your social media marketing strategy should deliver an experience for a visitor.

This is how they will remember your company and when they're in the market for your services. You will be the first company they think of because you’ve shared an experience together and they now relate to you. With this idea in mind managing your B2B social media suddenly becomes much easier to crack.

Back to Balfour Beatty’s Instagram account. The main thing that makes it stand out is their foray into the instagrid territory (posting 4 or 9 photos in succession to deliver a bigger photo grid made up of the separate photos). You can achieve this by figuring out how to post images in the right order or alternatively by using an app called Instagrids.

Many construction sector marketing professionals struggle with ideas for Instagram. One of the insights that we also shared in our B2B Instagram strategy post is to showcase your team in a relaxed and fun way. This should be a complete opposite to the corporate-style hire announcements.

ISG is doing half-decent job on their Instagram account, unfortunately, it has tailed off after Christmas, and it’s also fairly obvious they’re struggling to come up with a good mix of topics.

Posting 20 staff images in succession (no matter how cute they are) can actually lose you followers instead of gaining them. There are plenty of exciting topics that construction marketers can cover on their B2B social media accounts, including:

In fact all 5 builders who use Instagram are doing a reasonably good job. What they lack, though, is a good mix of topics. Balfour Beatty is good at instagrid, ISG can make their staff look fun and relatable, Murphy Group have allegedly the most beautiful bulldozers in Britain while Laing O’Rourke and BAM have a special talent for delivering top-notch urban photography. If you mixed the five, you’d have a perfect B2B Instagram account. On their own they're just not good enough to warrant thousands of followers.

I also noticed that the construction marketing teams who are giving visual content a good shot are struggling to come up with enough content. With so many B2B companies competing for attention, the quantity of what you share on social media is often as important as the quality. 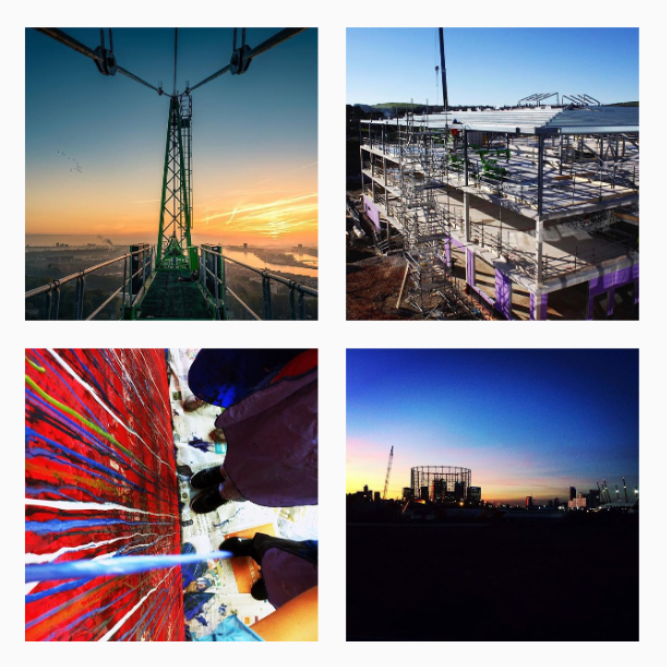 Special mention goes to BAM who is the only builder on our list to be using Pinterest (or at least the only one showing off their Pinterest). They’re using Pinterest to showcase their previous projects, however, Pinterest is a curation platform, so I’d expect to see additional Pinterest boards featuring exciting architecture from around the world. This is what is currently missing from BAM’s account.

It looks like Balfour Beatty’s strategy of syphoning Facebook users on to their Youtube account is paying off. Their best videos have thousands of views. Their “Meet the expert” series is truly inspiring as are videos on 3D printing and 4D modelling. This kind of visual/educational content applies to a much wider audience. This way you’re casting your net wide while still staying true to your core values and main speciality.

The main thing you can learn from BAM’s Youtube account is the importance of good video descriptions. Many B2B companies simply upload their videos and leave them there. Always add a good-size description and make sure your main keywords are both in the video title and description, and you suddenly see the views rolling in as your videos begin to rank in Google organically.

And the winner, at least from the perspective of accumulating the most Youtube subscribers, is Mitie Group with nearly 600 subscribers. And extra props to them for putting a good thought into video thumbnail appearance. Something that Interserve should learn to do better because their approach to thumbnails is costing them thousands of views.

Twitter as the leading channel for construction industry marketing

While the level of adoption of different social media channels varies from company to company, everyone on our list is using Twitter. True, along with LinkedIn, Twitter is the best channel for B2B lead generation, however, companies have to remember that it takes time and effort to figure out which is your best social media channel. And usually you can’t pinpoint it to a single channel, that’s why it pays off to keep a presence on at least three channels.

A nice surprise was the friend-to-follower (FTF) ratio of these Twitter accounts. You see many B2B companies following more people than follow them back, which really decreases their authority. We saw a positive FTF across the whole portfolio, however judging by the number of followers of some companies we think this might be accidental. Beginner’s luck, so to speak.

All companies, with an exception of Vinci and Keller, have been tweeting regularly. Balfour Beatty, Kier, BAM and Willmott Dixon come on top with 40K+ followers and fairly decent-looking Twitter content stream. Another set of metrics that many companies overlook are related to Twitter Lists.

For example, our Top achievers have all been added to Twitter Lists by 400+ people. Consider this a token of authority. With a relatively low number of Twitter users curating topical lists, if you can get 400 people to add you to a list, it tells you that you’re doing something right.

Another angle to look at lists is how the construction companies are using this invaluable Twitter functionality to curate valuable content. And the overall outlook is rather bleak. Mace Group has begun working on Twitter Lists at some point and although they’ve managed to block out the topics, there’s just not enough members in their lists.

Mitie has also tried working out what to do with Twitter Lists but the effort hasn’t amounted to much. They should do it more because curating Twitter Lists is a great way to get in front of the right people and to establish your authority in Twitterverse.

Generally, we were impressed with how well these construction companies are doing on social media. There is room for improvement, though. I hope you find some good takeaways in this article. What is your biggest bugbear when it comes to social media marketing?

If it’s lead generation and ROI, download our construction marketing ebook for some tips and insights or check this page for a free construction industry social media marketing assessment.