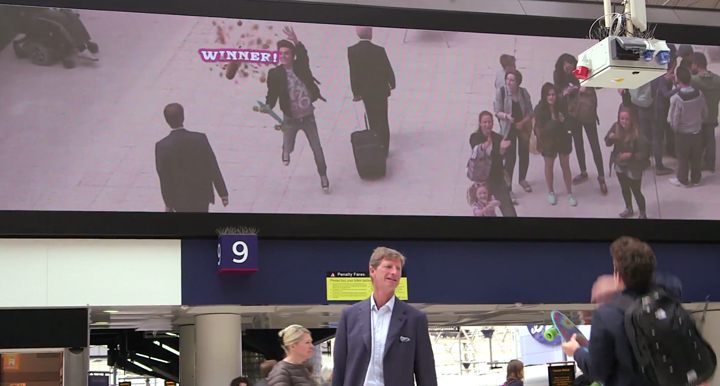 It’s the largest digital screen Waterloo has ever seen, attracting more than 150,000 consumers over 48 hours.

Cadbury’s #FreeTheJoy campaign was an instant success, using augmented reality to create a motion game for the public. What does the campaign tell us about RTM (real-time marketing) and social media?

Taking place on Waterloo Station’s brand new motion screen, the campaign required members of the public to kick and hit the 3D objects floating around on the screen. The virtual objects ranged from footballs, cars, shoes and hearts, which floated above their heads in an attempt to guess what they might be thinking about and what might make them happy. Commuters were challenged to virtually burst the chocolate objects on screen in order to be rewarded with a promotional Cadbury chocolate bar. The chocolate objects moved in sync with those playing, causing a lot of hype and interest in the game; players had great fun jumping in the air, waving their hands around madly and kicking as high as they could reach!

Cadbury’s significant marketing investment aimed to raise awareness of their current on-pack promotion (where you can win whatever brings you joy, made entirely of chocolate). Conceived by digital agency Elvis, with the creative technology solution provided by Grandvisual and the experiential activity handled by Pretty Green, Cadbury successfully delivered a “dynamic” and “high impact” campaign.

So what does the campaign reveal about social media activity and real-time marketing? Well, Cadbury are high-flyers in the real-time marketing (RTM) world, and the majority of us probably won’t be getting our campaigns up on a screen in Waterloo any time soon… but their activity does highlight the need for constant innovation and creativity. There’s no denying that Cadbury keep a firm grasp on the ever-changing market and that they understand and take an interest in their audience. #FreeTheJoy is a personal campaign which really tries to understand the values of Cadbury fans worldwide. So the big question is… Are you doing enough to engage with your audience? Is your marketing team thinking outside the box and going above and beyond to reach your audience?

If you need help with your content marketing activity and social media creative campaigns, get in touch with us today via 01202 788333 or drop us an email via marketing@lexisclick.com. We look forward to hearing from you! 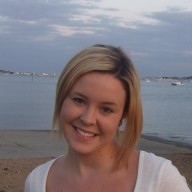 Alice is the Content Marketing Executive at LexisClick Online Marketing. With a background in media and publishing, she's savvy with spelling, grammar and punctuation. She knows how to pack a punch in each paragraph! Alice also has a keen eye on social media and enjoys managing multiple accounts for various clients.